Under the left standing on the Links the sale-side finds you to further numerous websites to the respective Champion Shire Horse and Gypsy Cobs or Irish Tinker.

The on the four photos and Shire Horse stallion pictured on the left edge-strip is our 1. Shire Horse sire STANLEY HOUSE NULLI SECUNDUS Stud Book No 45997.

The meek, especially lovable Shire Horse sire STANLEY HOUSE NULLI SECUNDUS Stud Book No 45997 is at the March 06. of 2002 in the ages of 23 years on our private Shire Horse stud farm in Kirtorf, in peace and without aches, at senility dies.

On both photos the heavenly is beautiful, for each friend of the Shire Horse through his charisma very impressive 2. Shire Horse sire the superlatives of our

In 1992 my decision fell in England this stallion, that all the best quality's of the Shire Horse in itself unified, to get to Germany about with Him on our private Shire Horse stud farm Shire Horse of the superlatives to breed.

We offer to you, exclusively, the best breeding-successes out of 23 years horse-breeding, character-solid, reliable, healthy Shire Horse and Gypsy Cob or Irish Tinker, that without fear have full trust to persons.

At the August 11. of 2003 became with the birth of the Shire Horse colt KRAEMERS MUEHLE ACE the last Shire Horse foal of our breeding with the Shire Horse sire SLADBROOK SELECT Stud Book No of 46671, on the yard bears, further horses stand now and in future not to the sale.

There is world-wide only about 1.350 Shire Horse, yet becomes the breeding • of an of the extinction threatened to classical horse-race- of the mother-breeding-association of the English Shire Horse Society and the Germans Shire Horse club e. V. • massive boycotts.

What the derivation, the character, the type, the natural stand and the education involve there is world-wide no better Shire Horse, as our • with 23 years experience in the Shire Horse breeding • ideal Shire Horse bred into the classical type • all Shire Horse of our breeding is without exception true gentleman and gentle giants under the horses.

There is world-wide only about 1.350 Shire Horse, yet becomes the breeding • of an of the extinction threatened to classical horse-race- of the mother-breeding-association of the English Shire Horse Society and the Germans Shire Horse club e. V. • massive boycotts.

What the derivation, the character, the type, the natural stand and the education involve there is world-wide no better Shire Horse, as our • with 23 years experience in the Shire Horse breeding • ideal Shire Horse bred into the classical type • all Shire Horse of our breeding is without exception true gentleman and gentle giants under the horses.

Welcome on the biggest former volcano Europe, in the hearts Europe. 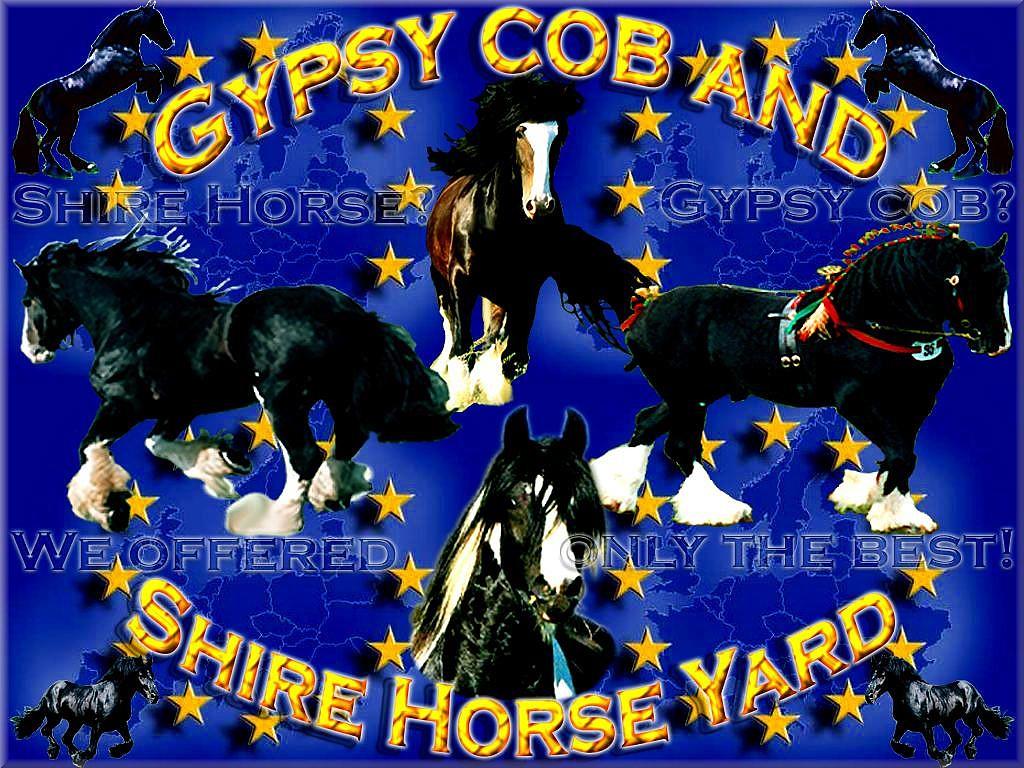 Off March of 1993 became the horse-breeding into the bird-mountain, in company of our dogs, at the German fairy-tale-street into the own upper-Hessian farm, in Kirtorf, Marburger street of 68 continues.

The Weils Glänzer mill is about a more historic 800 years old agricultural business, registered into the list of the Hessian culture-monuments.

You find our horses - until September the year of 2006 - as well as the on our properties of native ice-birds and now 40 hoar-heron, in Kirtorf-Kirtorf in the Marburger street of 68, that estates lie with his Biotopes and numerous volcano-sources into the outside-area between the little city Kirtorf and his district Lehrbach, 800 m western the Kirtorf city-border.

Into the former water- and sawmill with 2 mill-wheels existed a Sire-station with up to eight outstanding Sires of this 4 rare horse-races.

In the Slideshow you can yourself, with temporary 1386 photos of August of 1990 until February of 2005, in few minutes a picture of the Tinker pony and Shire Horse yard and the horse breeding of the race Frisian, Shire Horse, Dales Ponies, Fell Ponies and Gypsy Cob, does. All used photos, besides the 1., comes out of the own 23 years horse-breeding. 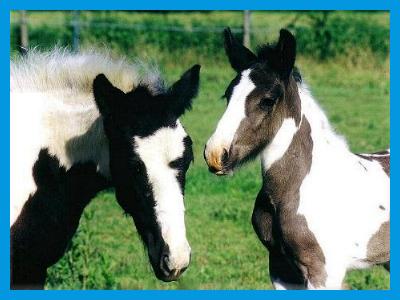 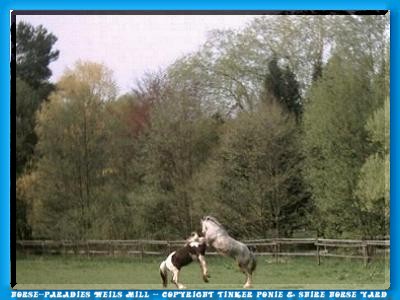 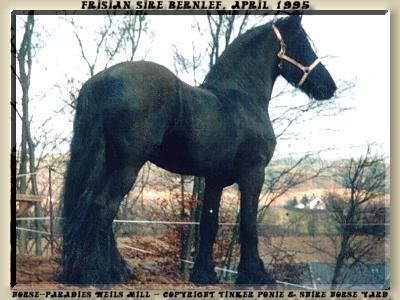 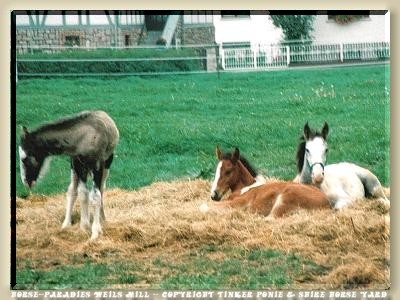 Of May of 1995 until June of 2001 the horse-breeding became, conditional through big demand to the horse-races bred of we, with widened further-leads horse-continuance in the historic knight-manor in Kirtorf-Lehrbach. 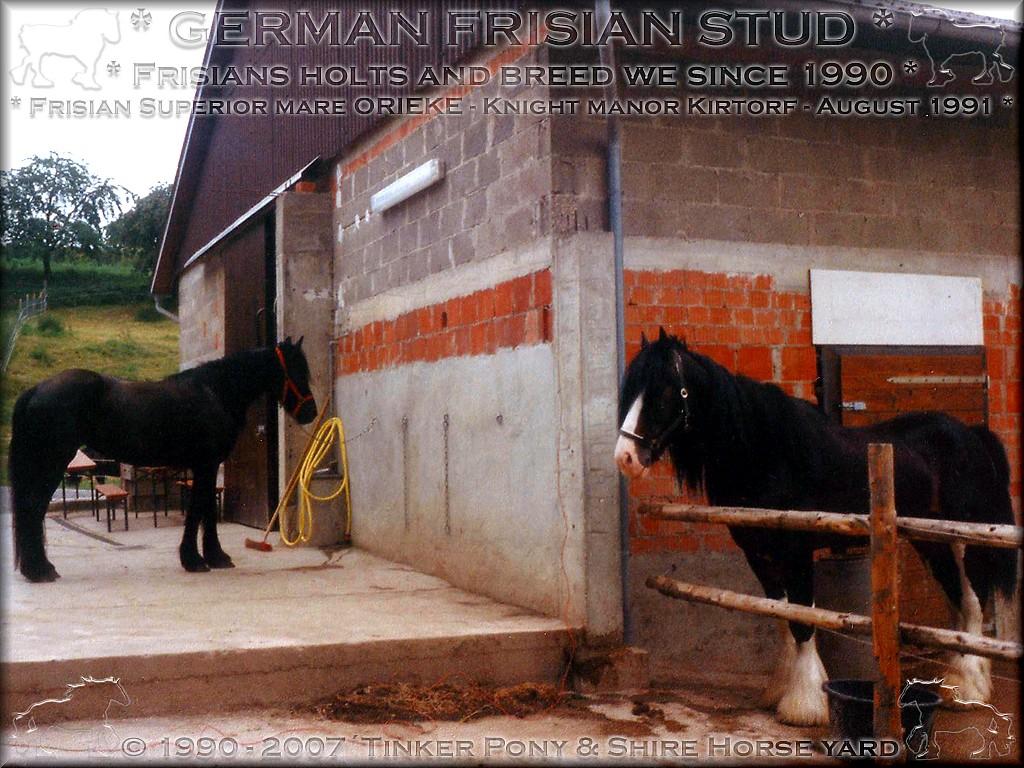 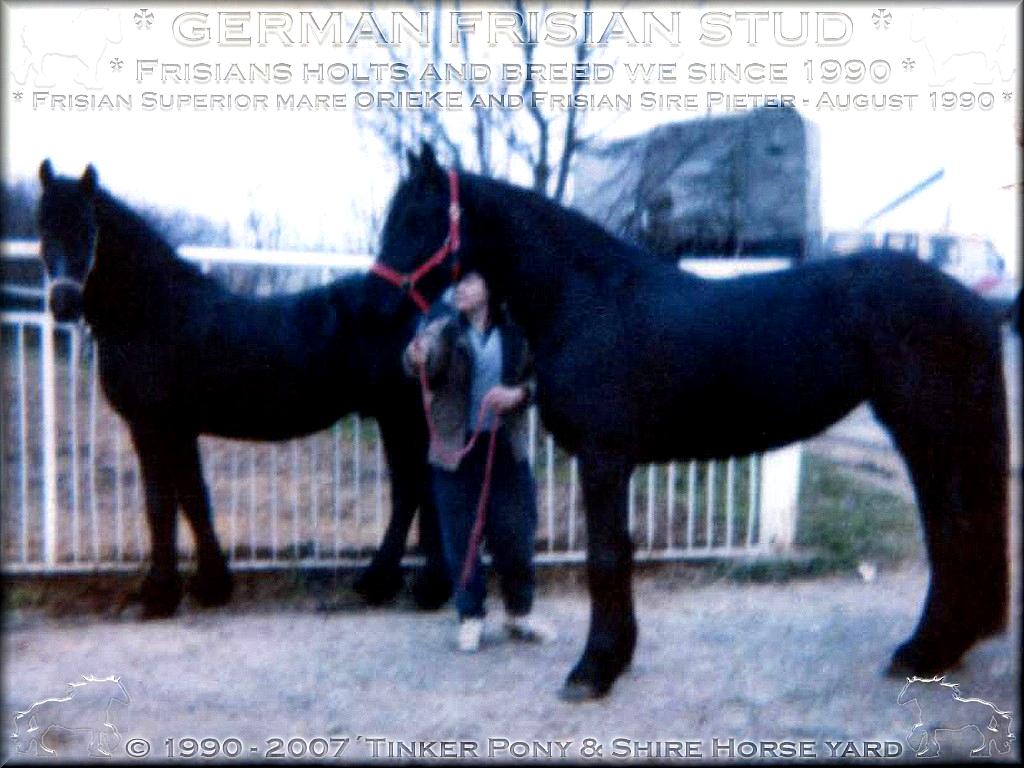 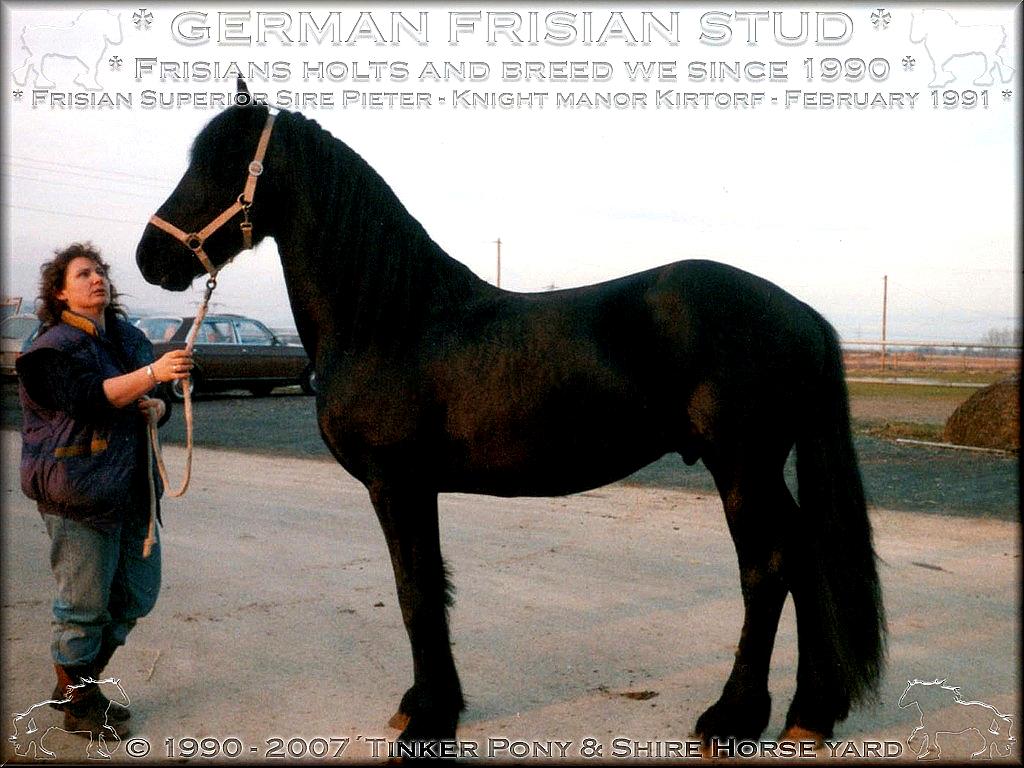 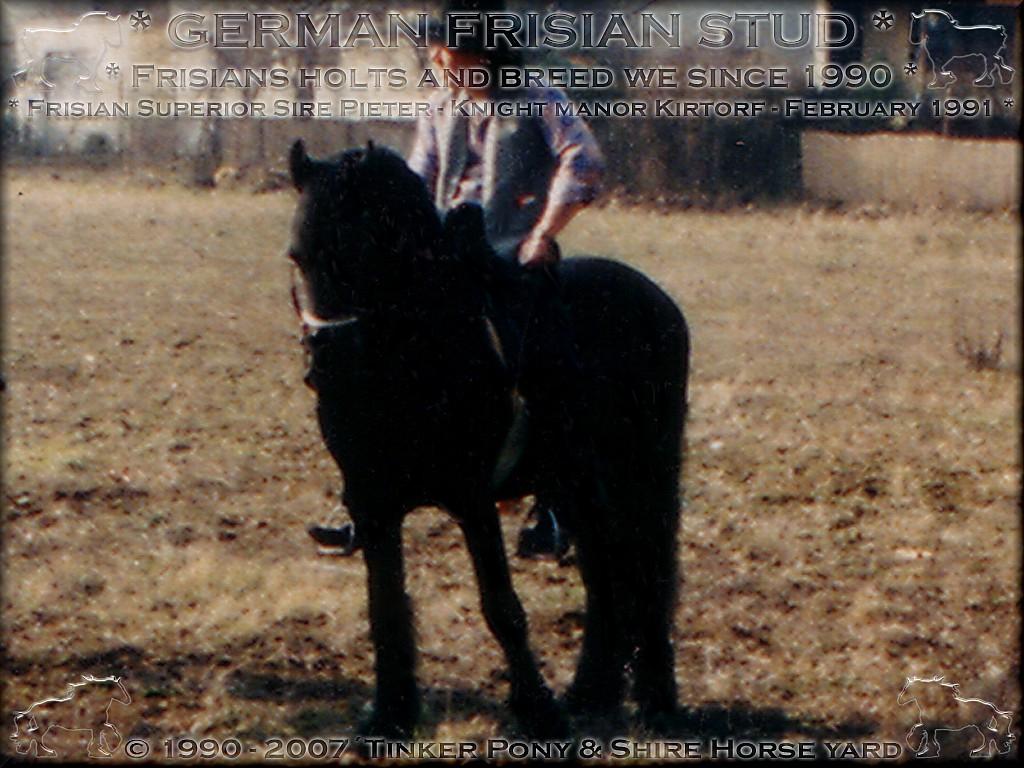 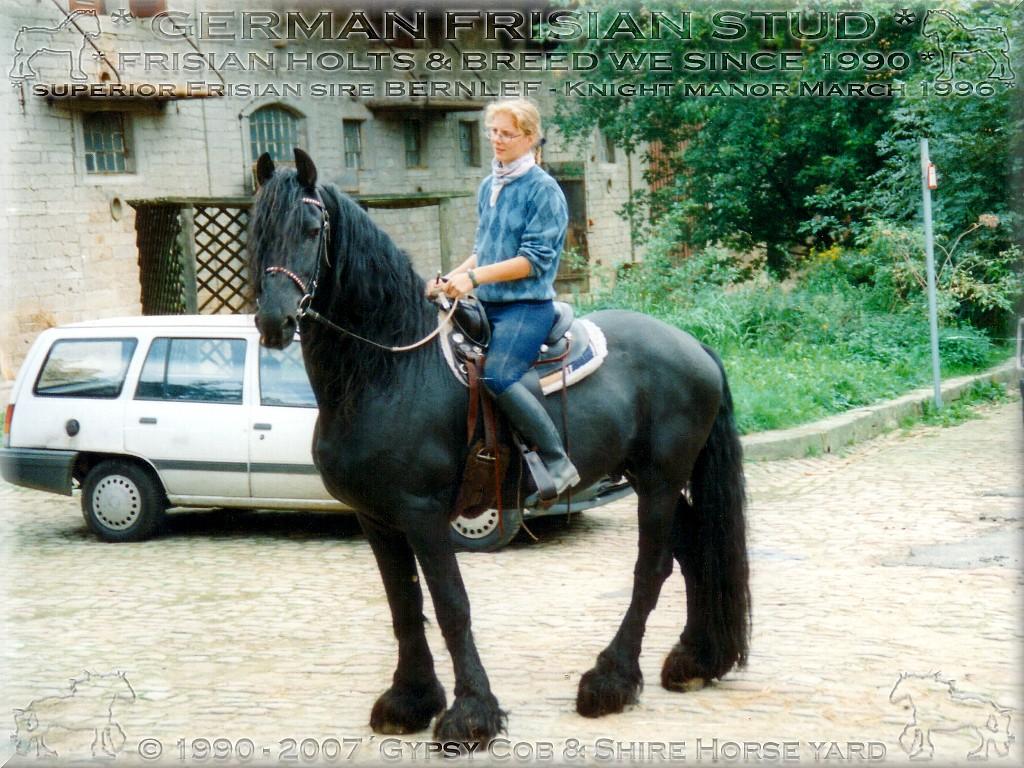 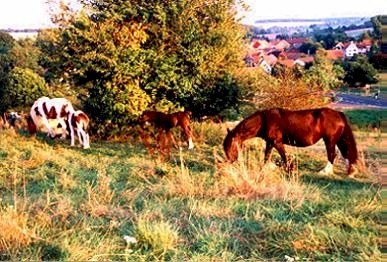 Within the knight-manor could up to One- Hundred horses, into numerous paddock, open-stalls, sprint-stalls and boxing, in accordance with the natural life-manner of the horses, holds and is bred.

Off we put July of 2001 the reduced horse-breeding into the outside-area of Kirtorf on the own farm away, since 2003 the horse-breeding has put in completely.

Quality necessitates, first right at the horse-breeding, diligence and responsibility of the serious agricultural horse-breeder, that is not always cheap.

In Germany the agriculture already is through numberless lawful editions with high business-expenses before- loads. 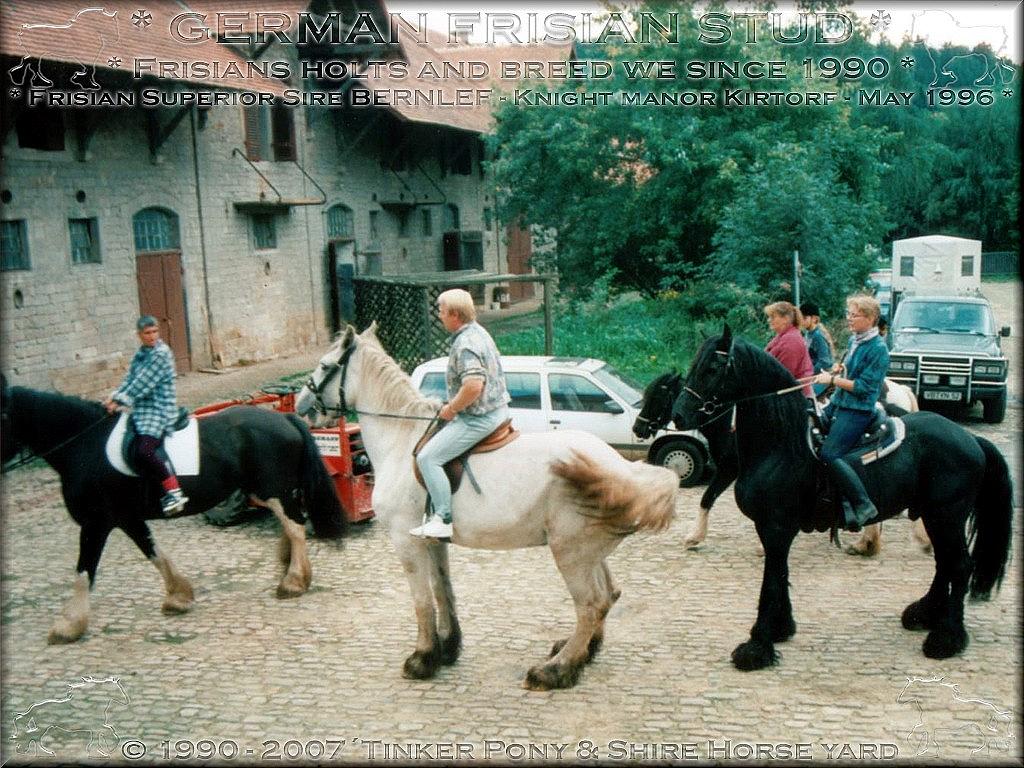 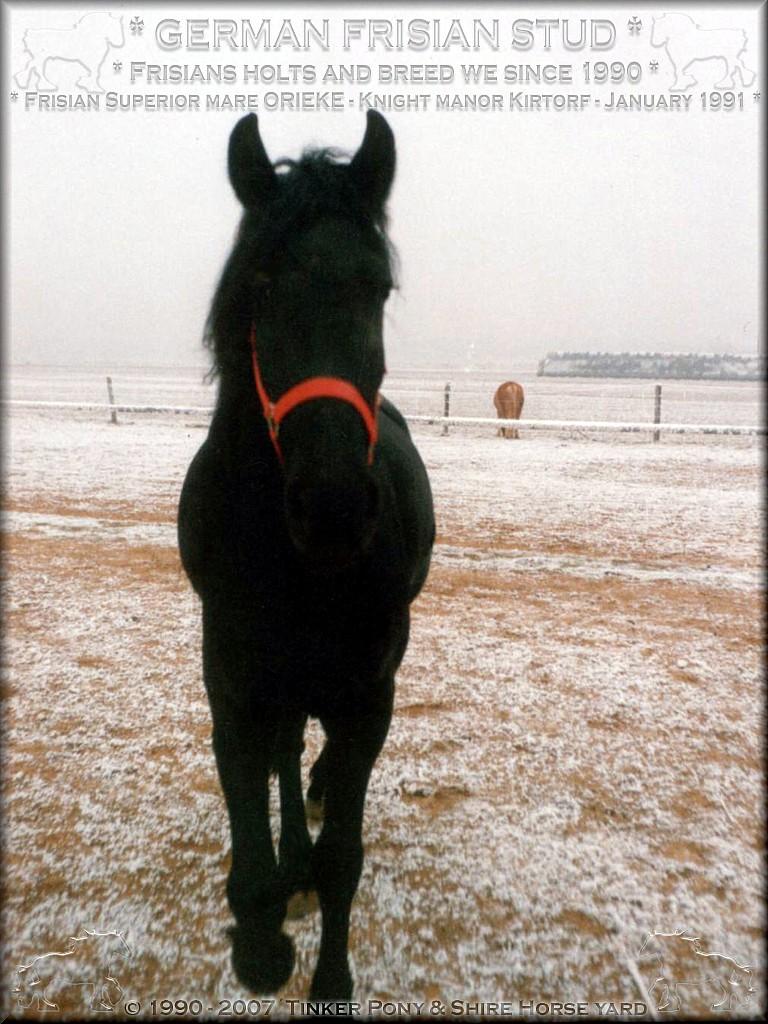 If to the reason-expenses, the high expenses for foreign employee and for big quantities foreign feed-method of the business to carry is and the own producer-expenses consequently the quintuple of the to achieves amounts to market-price, becomes it not only expensive but ruinous good horses to breed.

Out of prominent reasons and because of the bad health the overall horse-breeding had to be put in unfortunately, all former breeding-horses of our stud farm stand to the sale.

No serious German stud farm can with the horse-import-sale-prices, the originally for the butcher of definite horses, pure horse-dealer into a fair competition steps, this has 3 whole simple however very massive economic reasons.

1. The purchase-price including transportation three years of old import-horses out of Ireland and England, that in Ireland and partial also in England to 99% on about 10 qkm big and bigger, fences in surfaces since the birth free-runs and the in your life neither a hoof-smith of one more veterinarian let alone the a medication against worms has seen, costs the importer € of 500 until maximum € of 600. 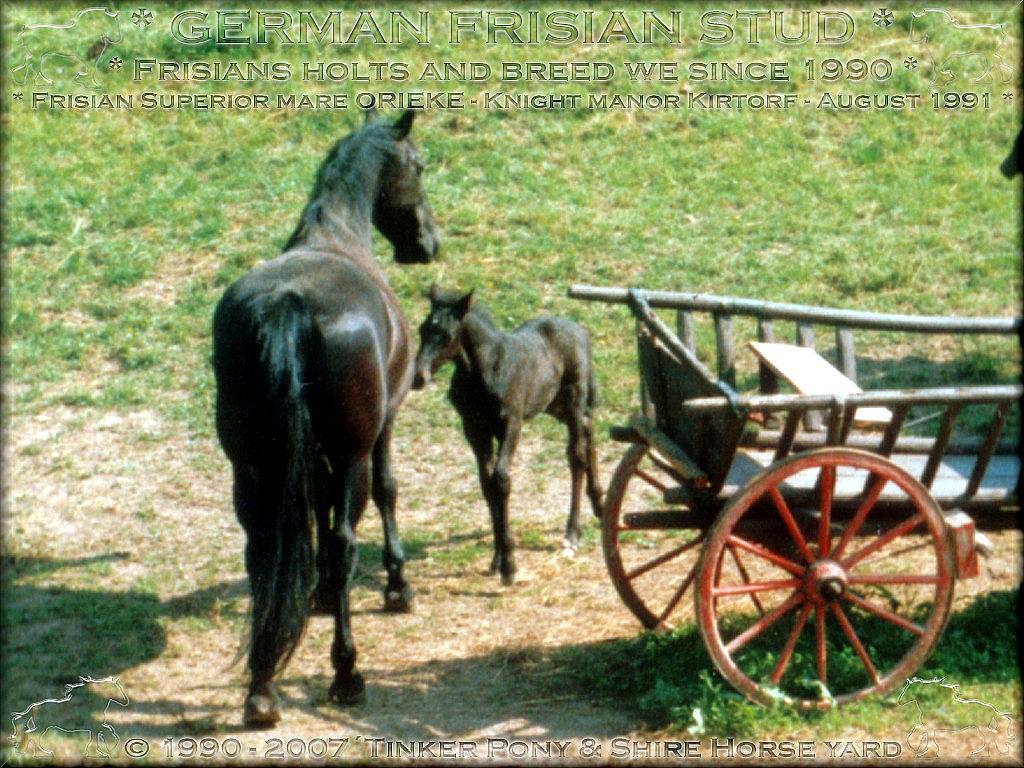 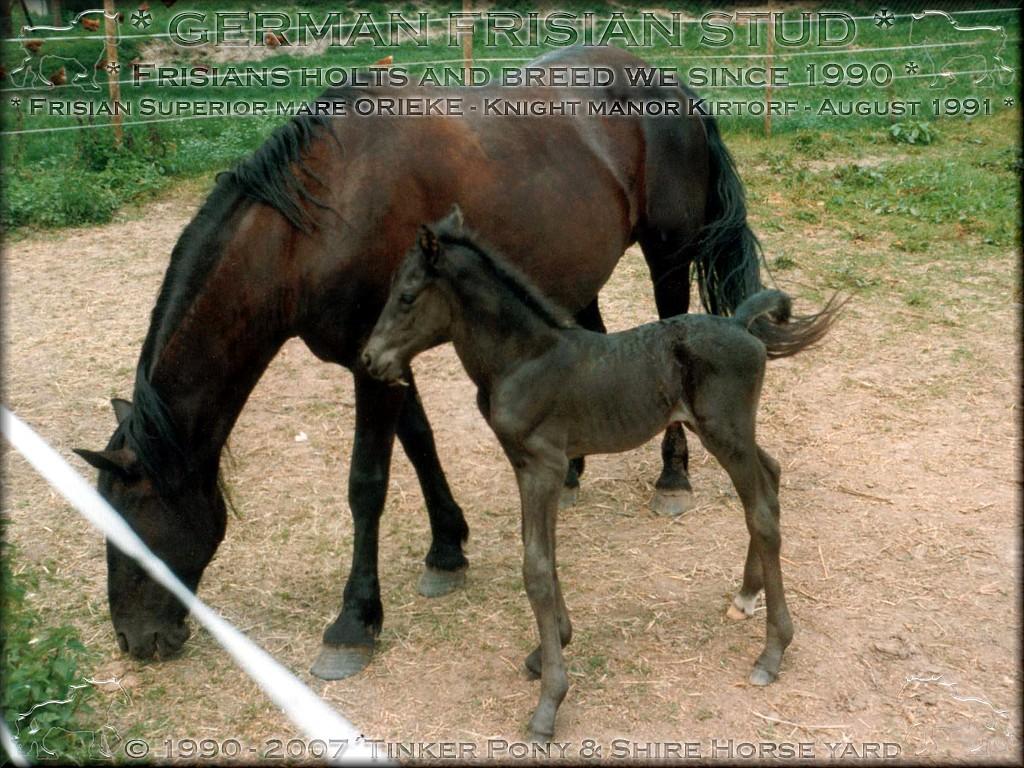 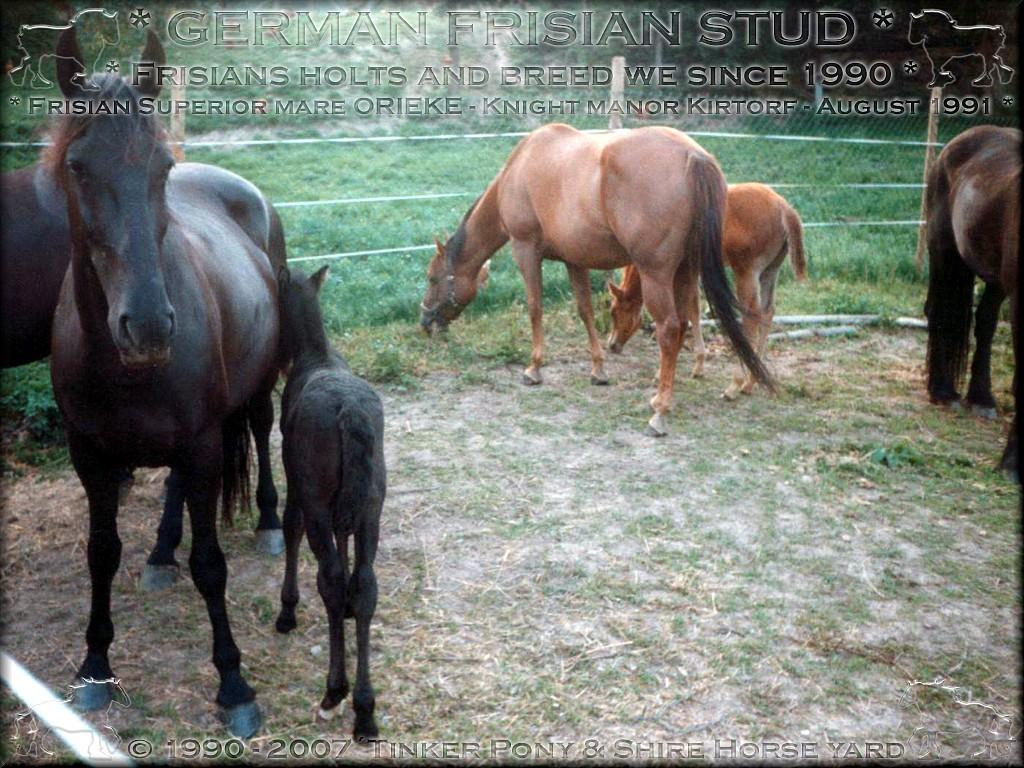 2. universes import-horses the European horse-dealers (also the German) not within a week sell comes inescapable, to avoid about financial losses of the dealer, Europe-wide weekly too several hundred horses to the butcher. (Hello salami-friends now your knows where your sausage comes.)

With this "good business" the importer on each event receives his "investment" full back.

The horse-dealer can thanks of his purchase-expenses back-gotten of the butcher immediately new horses shop, this with 300 until 500% profit at very naive "horse-friends" the out of un-knowledge at the wrong position at your new horse with power on expenses of the own consequence-damage through enormous veterinarian-expenses and the attacked health your future horses of a couple of Euro want to save, further sells.

The main-expenses-factor at a horse is not, how almost all potential new horse-friends basic wrong believes, the horse at itself but the personnel-expenditure and the further high consequence-expenses of the horse-stand, that no only horse-dealer ready is to carries because else profit is not only very quickly is belittled but appear economic losses.

3. Each serious German horse-breeder costs about the newborn foals € of 3.000, that the stand both necessary parents-breeding-horses, while the 11 months the pregnancy of the breeding-mare, already costs per parents-horse about € of 4.500.

Our agricultural breeding-stud farm lies into the center from Europe and Germany, here in the middle from Hessian.

The bird-mountain is to be sure (to your pacification) since approximately seven millions years quiet; that is however hatchet-yew not, that here also else all extinct is.

The bird-mountain is an of the earthiest German method-mountains, central in Hessian and only 80 Km from the Frankfurt Rhine Main Airport and the biggest European center Rhine-Main removes.

You find here a paradise, not only for horse-friends, but also for hikers, persons out for a walk.

Wed quiet your eyes! The green of the meadows and forests are still natural, air and water are still fresh and unspent.

No miracles that at us rare bird-types, for example ice birds and natural our exact so rare "horse-races," their much-loved at home has. 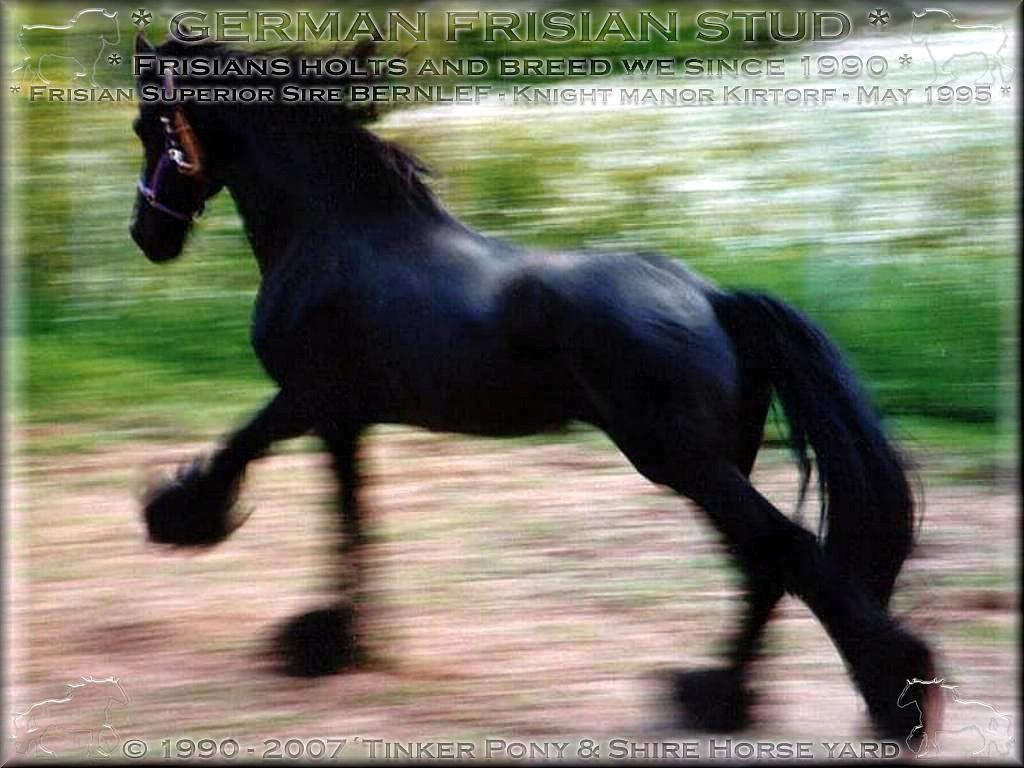 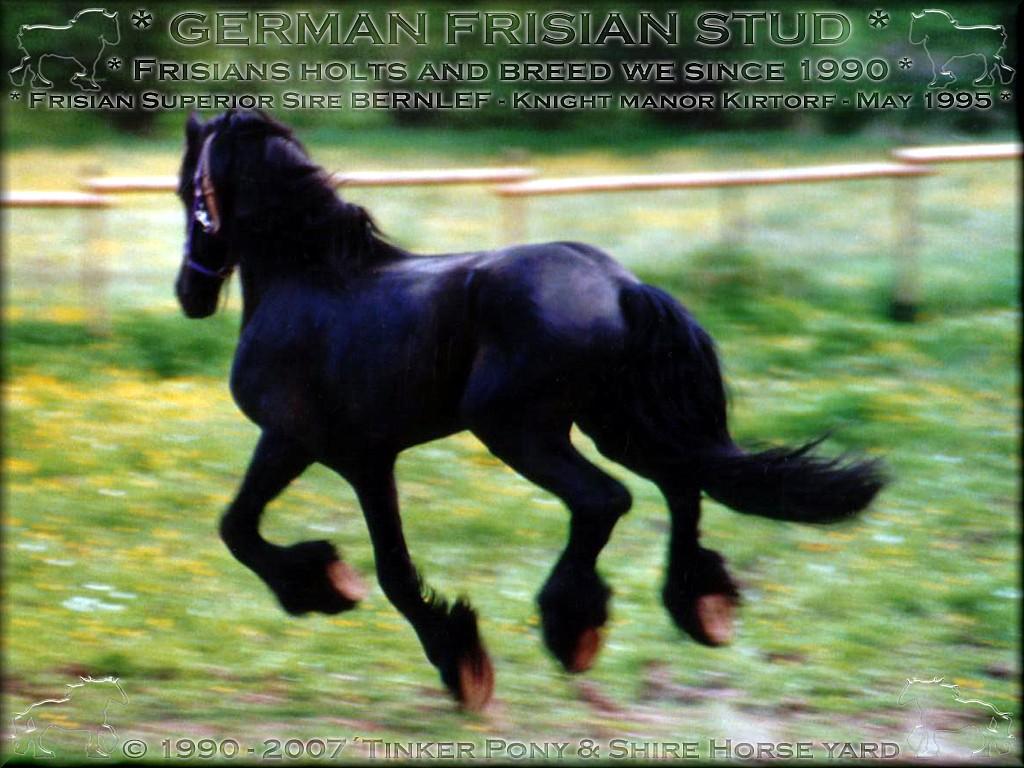 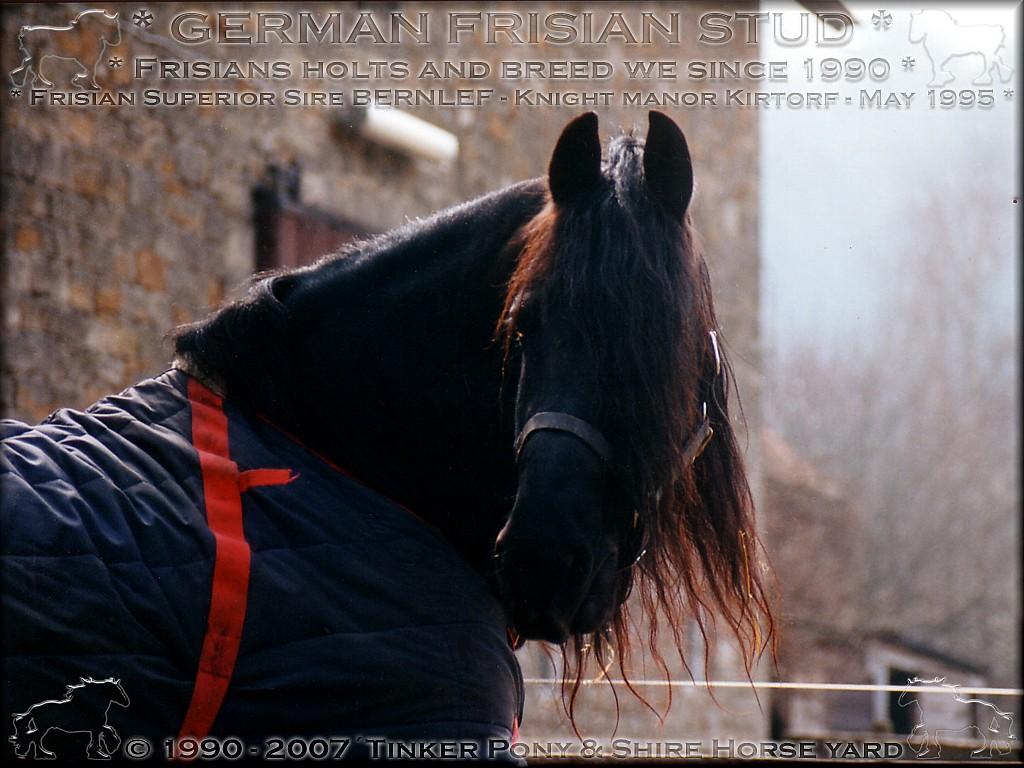 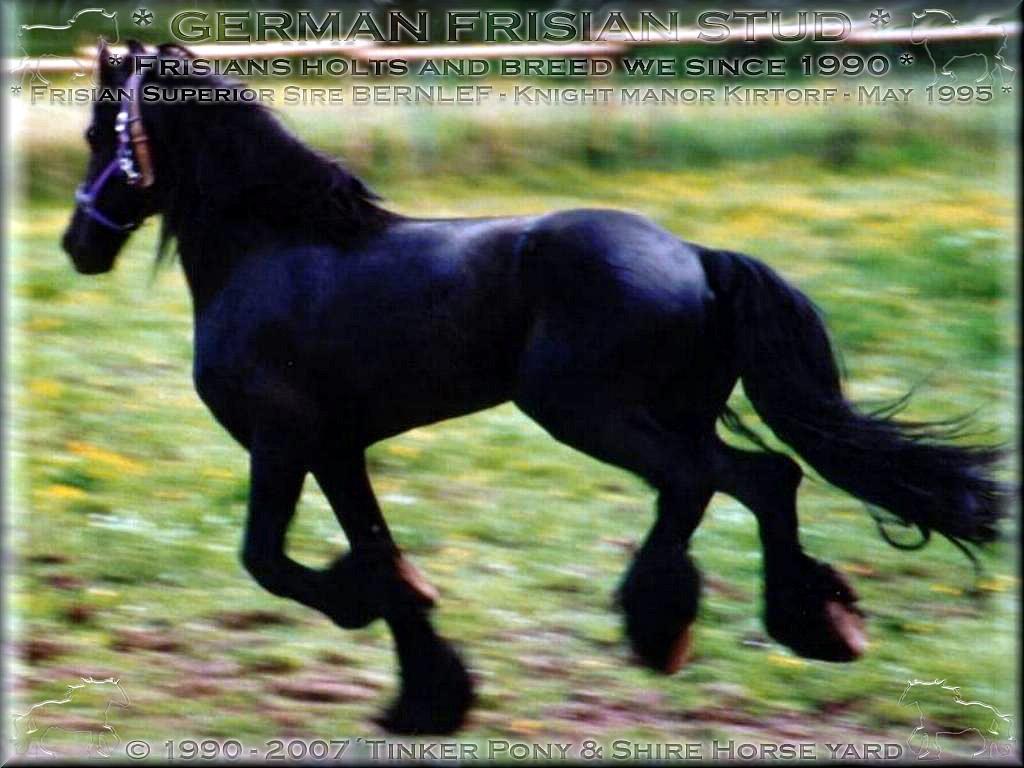 On several hundred square-kilometers, within the biggest  closed forest-area Germanys, has you to the unique possibility the nature new to discovering.

Enjoy at the diverse animal- and wildlife, because nature there is gratuitous.

Here into the bird-mountain and in method-Hesse itself the villages and cities their rural charm have conserved.

Let yourself rounds up of the peaceful truss-idyll of our villages and cities.

In the hearts Hesse, has so many a say and fairy-tale their origin.

That one at we on historic cobblestones and into the narrow, romantic alleys heart could be losing, will confirm many of our guests. 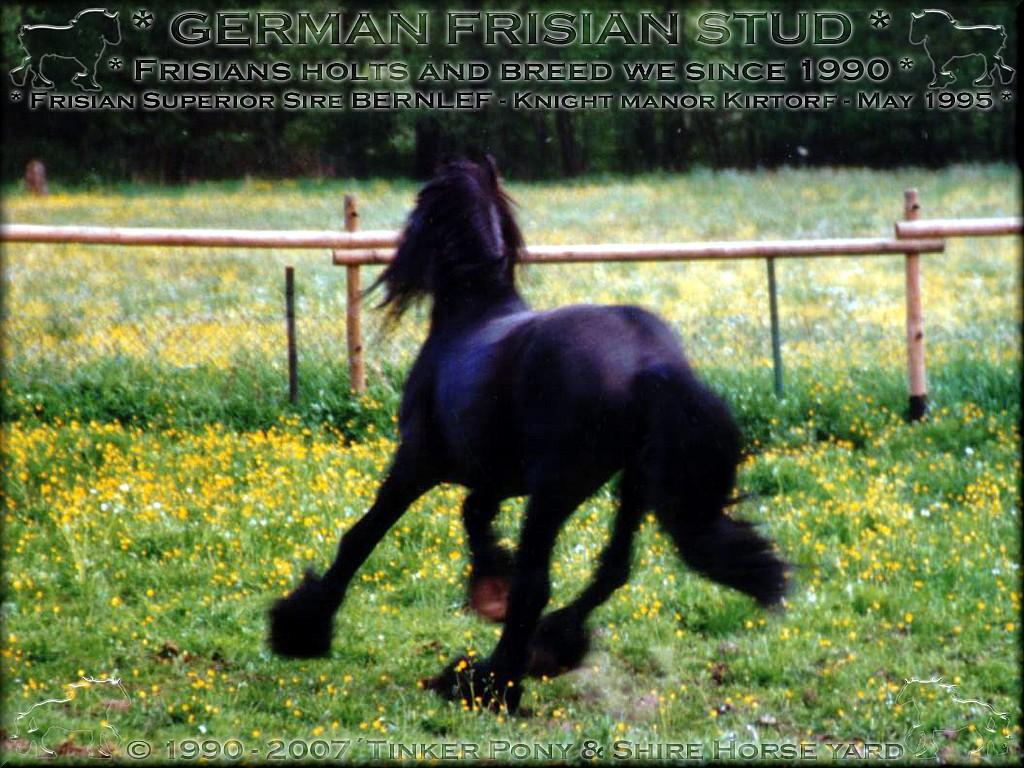 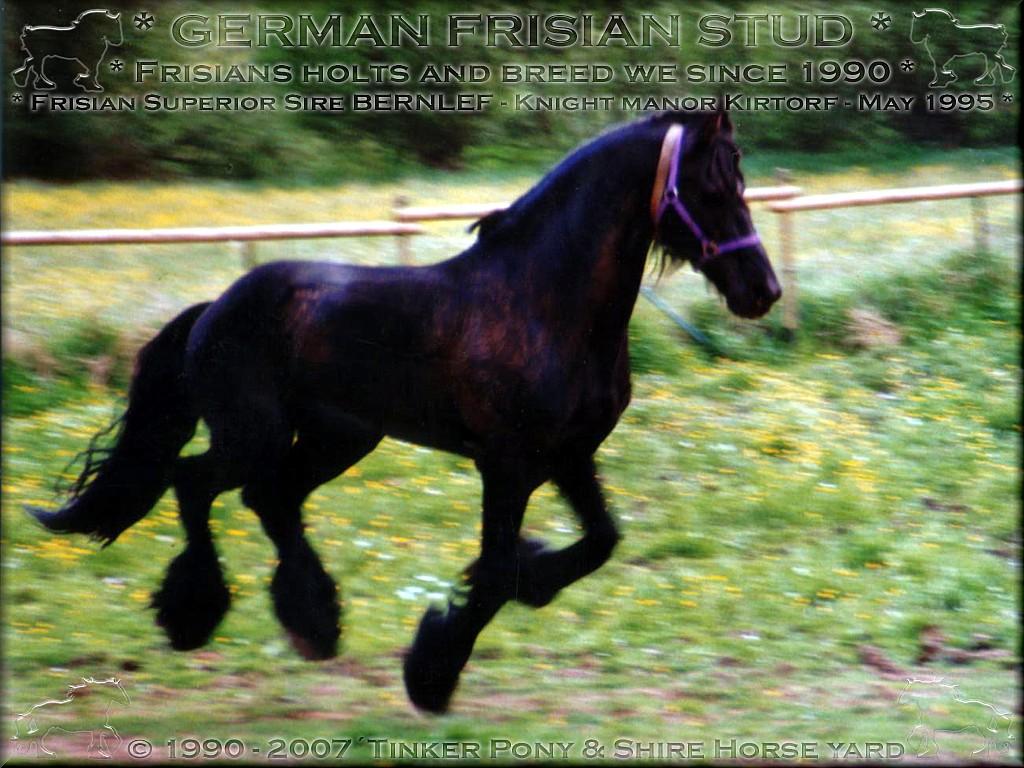 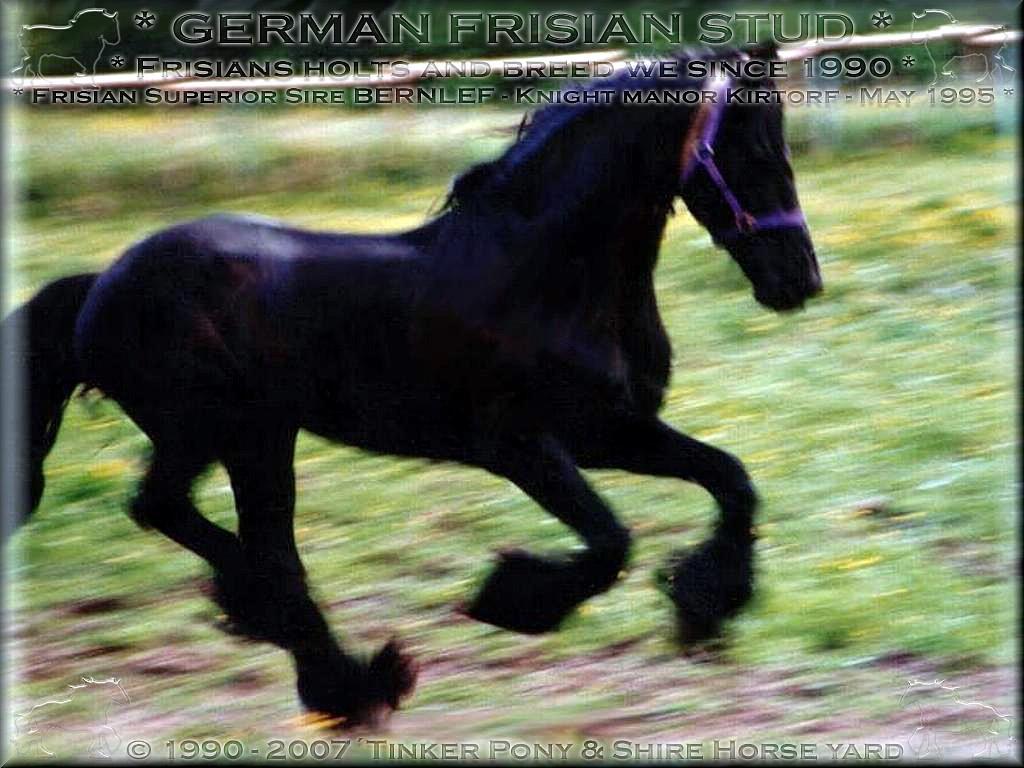 The whole year there is numerous occasions for different, traditional festivals.

The visit of traditional festivals is an agreeable alternation, in our else extensive uniform time.

Also for teenager and young remains adults there is numerous possibilities in Discos and tent-events of the area to relaxes as well as new friend and friends knows to learn.

If you at further sporting activities in the nature, how hiking, cycling and swimming interest have, so there is also to this all sorts of countryside and city's structural appealing possibilities.

We give our Horses Wing's, you fly of us directly to you,
at each place on this World.

Questions you we, here has become also your wishes.